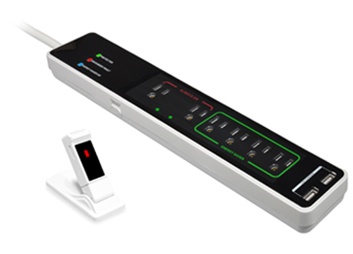 If you have electronic equipment and don’t have a surge protector, you’re playing with fire (perhaps literally). Surge protectors let you plug in multiple devices; more importantly, they protect your electronics against power surges.

A power surge, or transient voltage, is an increase in voltage significantly above the designated level in a flow of electricity. In normal household and office wiring in the U.S. the standard voltage is 120 volts. If the voltage rises above 120 volts, you’ve got a problem. A surge protector helps to prevent that problem from, say, frying your Mac.

According to Russell Barton, president and co-founder of BITS Limited, when many surge protectors bite the dust due to a power surge, they’ll still function as an unprotected power strip — and you may not even realize that you’ve lost power surge protection. This puts your electronic equipment at risk of severe
damage if another surge hits.

Worse, some surge protectors are a fire hazard in very large surges, because the MOVs [metal-oxide varistor] fail and start to burn before the internal fuse has a chance to blow. With the True Surge, if there’s no protection there’s no connection.

In addition to cutting the connection if the protector is blown, theTrue Surge features a patented safety circuit and custom MOVs that are thermally coupled together for a fast reaction time. The entire circuit is cement-encased to
prevent house fires that can occur with current surge protector technology.

True Surge technology is also available in BITS Limited’s flagship Smart Strip surge protector. The Smart Strip allows you to protect all your high-end electronics and the environment — a win-win situation. It cuts down power usage to your electronics by sensing the current to the “control outlet,” and smartly turns on or off the current to the strip’s “automatically switched outlets.”

Turning on or off your new LCD TV connected to the control outlet will switch on or off your speakers, Blu-ray player or any other device connected to the automatically switched outlets.  This helps stop wasteful “vampire power” saving an average of US$52.91 in energy costs a year. Pricing for the Smart Strip ranges from $29.95 to $39.95, depending on the model.

There’s even a $34.95 wireless Smart Strip. When its USB Transmitter is connected to a device’s USB port, it detects power on that USB port and wirelessly controls the “Energy Saver” outlets on the surge protector, accordingly. Alternatively the USB transmitter has a button that can also be used to turn the “Energy Saver” outlets on or off manually.