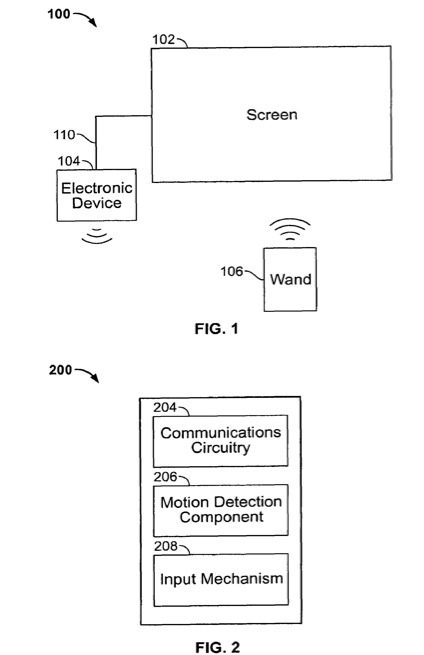 Could this have anything to do with the rumored “iTV” (an Apple-branded HDTV)? An Apple patent (number 8194037) for a has appeared at the U.S. Patent & Trademark Office.

Using these mechanisms to provide inputs to the media system, the user may provide inputs by pressing buttons with their fingers, or by moving their fingers across or on the mechanisms. Although such mechanisms may be effective, they may also be inefficient and non-intuitive, which may sometimes lead to frustration. A media system in which a user may control a media application operation by moving a wand is provided.

“The electronic device may perform any suitable operation in response to receiving an output (e.g., generated by a motion detection component) or input (e.g., received from an input mechanism) from the wand. In some embodiments, the user may control the position of a cursor displayed on the electronic device screen by moving the wand. In response to receiving corresponding outputs from the motion detection component, the electronic device may displace the cursor. In some embodiments, the user may wish to re-center the cursor.

“To do so, the user may select a centering option displayed on screen, provide a particular input using the input mechanism, or move the wand in a particular manner (e.g., swing the wand a particular number of times) to direct the motion detection component to provide an output associated with centering the wand to the electronic device. In some embodiments, the electronic device may detect when the wand is moving unintentionally (e.g., due to hand drift or the wand falling) and may automatically center the cursor or ignore initial subsequent wand movements to overcome the hand drift.

“The user may control the playback of media using any suitable approach. In some embodiments, in response to receiving a user instruction to control the playback of a media item, the electronic device may display a playback scroll bar that includes an indicator. The user may move the indicator along the scroll bar to change the current playback position of the media. If the media includes video or images, the indicator may include a video region.

Duncan R. Kerr and Nicholas V. King are the inventors. 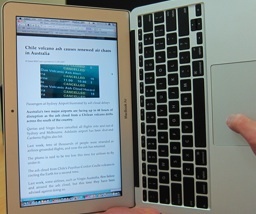