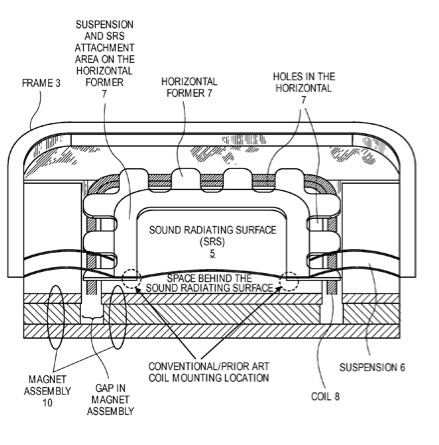 An Apple patent (number 20120121121) at the U.S. Patent & Trademark Office shows that the company is working on a speaker having a horizontal former. In other words, the company plans to beef up the speakers in all its iOS and OS X devices.

Here’s Apple’s background and summary of the invention: “In modern consumer electronics, audio capability is playing an increasingly larger role as improvements in digital audio signal processing and audio content delivery continue to happen. There is a range of consumer electronics devices that are not dedicated or specialized audio playback devices, yet can benefit from improved audio performance.

“For instance, smart phones are ubiquitous. These devices, however, do not have sufficient space to house high fidelity speakers. This is also true for portable personal computers such as laptop, notebook, and tablet computers, and, to a lesser extent, desktop personal computers with built-in speakers. Such devices typically require speaker enclosures or boxes that have relatively small back volume, as compared to, for instance, stand alone high fidelity speakers and dedicated digital music systems for handheld media players.

“In small back volume speaker boxes, there is an advantage to using speakers that have relatively small effective piston area (referred to as ‘Sd’) in order to improve low frequency performance. However, in conventional speakers, smaller piston area translates to a smaller voice coil and magnet system, because the voice coil is typically attached in the area between the suspension and the piston. A small voice coil and magnet system means that the force generated by the coil is smaller (when an audio signal is being applied to the speaker).

“Therefore, any gains in low frequency performance that might be made by adopting a smaller piston area may be lost because of a reduced sensitivity due to the lower force that is generated by the coil and magnet system. Previous efforts to address this problem have focused on providing a stronger magnet system and/or greater signal power to the coil.

“A coil is coupled to the peripheral portion of the horizontal former. This enables the mounting location of the coil to move further outward, thereby substantially increasing the size or area that is spanned by the coil. As a result, a larger coil and magnet assembly is realized, while maintaining the same piston area of the sound radiating surface. This enables the design of a speaker that has a relatively small piston area, for use in relatively small back volume enclosures, but that may have improved performance.

Christopher Raymond Wilk is the inventor.