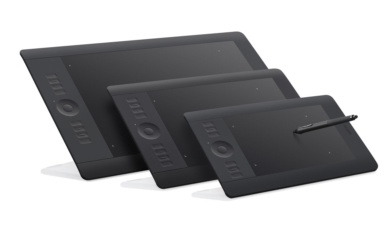 Wacom (http://www.wacom.com) has announced the Intuos5, the next generation lineup of tablets for professional photographers, designers and artists.

The professional matte-black, soft-touch finish and illuminated accents reflect a modern and durable design, according to says Don Varga, Professional Products Brand Director for Wacom Technology Services Corporation. To meet the workflow and workspace needs of Wacom’s diverse professional customer base, Intuos5 models are being introduced in the Americas in three different sizes (small, medium and large).

Not only is the Intuos5 able to recognize standard Mac and Windows gestures, but customizable gestures can be created in supporting applications. For example, a customized gesture could be created to open a commonly used feature within Adobe Photoshop.

Wacom continues to build customizable non-dominant hand controls.  On the Intuos5, these include customizable ExpressKeys (six on small size and eight on both medium and large sizes) and one Touch Ring, with four-function toggle. These features allow users to place commonly used shortcuts and modifiers at their fingertips. The ambidextrous design allows right-handed and left-handed users to rotate the tablet 180 degrees for easy access to the ExpressKeys and Touch Ring.

To help users remember their application-specific ExpressKey settings, Intuos5 comes equipped with Express View, a new Heads-Up Display (HUD) feature that displays the current settings on the computer screen.  Lightly resting a finger on any of the keys reveals the settings on-screen and fades within a few second.

For creative professionals, the Intuos5 Grip Pen remains the heart and soul of the tablet experience, Varga says. The Intuos5 pen registers 2048 levels of pen pressure and up to 60 degrees of pen tilt, allowing the pen to emulate the same feel, response and effects derived from working with traditional tools such as paint brushes, markers and pens.

In addition, Intuos5 features Wacom’s proprietary Tip Sensor technology, which means that pressure-sensitive effects can start with a light touch. The Wacom pen expands the creative effects that can be achieved within software applications that support pressure and/or tilt sensitivity such as Adobe Photoshop, Adobe Illustrator, Corel Painter, Autodesk Sketchbook Pro and many more. The Grip Pen also features a pressure-sensitive eraser and two side switches that can be customized for commands such as double-click and right-click.

With the Intuos5, Wacom broadens its offering for wireless connectivity. Now, all sizes of Intuos5 can be converted to a wireless tablet by installing the Wireless Accessory kit, sold separately on Wacom’s e-store.  The kit includes a rechargeable battery that charges through USB, a RF module that plugs into the tablet and a receiver that plugs into a USB port on the computer. The Intuos5, available today, comes in three models: Intuos5 touch Small (US$229.95), Medium ($349.95) and Large ($469.95).