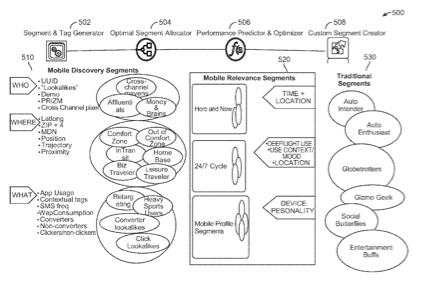 A handful of Apple patents involving population segmentation have appeared at the U.S. Patent & Trademark Office. They relate to electronic content delivery and, more specifically, to intelligent targeting of invitational content to a user based on user characteristics.

Patent number 20120042253 involves population segmentation. Per the invention, segments used to select content to be targeted to a user are recursively refined based on continuously derived user characteristics. Based on information gathered from new requests for targeted content and/or user interaction with previously delivered content the user is assigned to one or additional candidate segments.

Patent number 20120042262 is for population segmentation based on behavioral patterns. Per the invention, the technology analyzes a user’s behavior to assign a user to targeted segments. The segments to which the user is assigned can be a reflection of a user’s context with respect to potential targeted content. While a user can be assigned to many different segments, the user is likely to be most interested in content that she is presently interested in. Accordingly, the system can also prioritize or rank or order segments based on the user’s present context. Content is then provided to the user on the basis of the segments to which the user belongs and the priority of segments.

Patent number 20120041792 is for customizable population segment assembly. The described technology provides a mechanism for allowing custom targeted segments to be defined by parties outside of a content delivery system. Segments include collections of users grouped together based on common characteristics wherein targeted content is provided to a user based on her assignment to a segment.