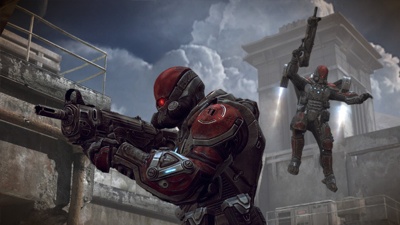 This new shooter from id Software has been published for the Mac by Aspyr.. The game can be digitally downloaded in English, French or German now via Apple’s Mac App Store, Aspyr’s own digital store GameAgent.com, and through other supporting Mac digital retailers.

Here’s how the game is described: “In RAGE: Campaign Edition you will take on bandit gangs and hordes of mutants with an arsenal of exotic weapons and special items, such as Wingsticks, personal turrets, sentry bots, and remote-controlled bomb cars as you play through the game’s full unaltered single-player campaign.

“The Mac version will also include bonus equipment formerly exclusive to the RAGE Anarchy Edition, including a Double Barrel Shotgun, the Rat Rod Buggy, Fists of RAGE and Crimson Elite Armor. You’ll also have access to the Wasteland Sewers Missions which feature additional mutant blasting gameplay and looting opportunities.”

RAGE has been rated M for Mature by the ESRB. RAGE: Campaign Edition has been rated 17+ on the Mac App Store. For more info go to http://www.aspyr.com/games/rage-campaign-edition