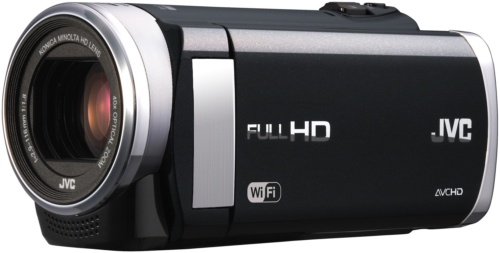 New JVC Everio camcorders announced this week at the Consumer Electronics Show in Las Vegas offer built-in Wi-Fi that allows video clips and still images to be emailed, wireless transfer of files to smartphones, and a range of other functions.

The new Wi-Fi models are part of an all-new seven-model Everio line. The models record in 1920 x 1080 Full HD based on the AVCHD format, and offer recording in UXP mode with a 24 Mbps sampling rate.  Also, all models offer HDMI output.

The Wi-Fi feature is available on four 2012 Everio camcorders. They include a free IOS app for wirelessly transfering video and stills to a smartphone for sharing via the Internet. It also allows the phone to be used as a remote control for the Everio and offers geotagging of video and photo files in conjunction with the smartphone’s GPS.

Video Email allows 15-second video clips (640 x 360 pixels) to be sent directly from the Everio to up to eight email addresses. Live Monitoring allows real time monitoring on a smartphone or computer of images taken with the Everio.  And Auto Photo Email automatically emails stills taken using Everio’s movement detection function to a computer or smartphone.

Video shows how company matches those with app idea with developers