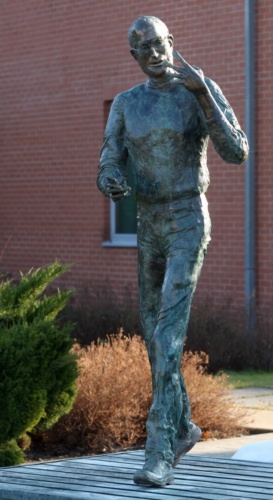 Commissioned by Graphisoft founder and chairman of the board, Gabor Bojar, the statue is the purportedly first in the world honoring the late founder of Apple, who passed away on Oct. 5.  Crafted by Hungarian sculptor Erno Toth, the life-like bronze statue stands near the entrance of architectural software maker Graphisoft ‘s Budapest headquarters.

The relationship between Graphisoft and Apple can be traced to the 1980’s, when Jobs came across the first version of Graphisoft ‘s ArchiCAD software at the 1984 CeBIT in Germany.  His first impressions of the software led him to throw Apple’s support behind the development and distribution of ArchiCAD, according to Bojar.

Graphisoft makes software for architects. Graphisoft Park is the first science/technology park in Budapest, established by Graphisoft in 1997 when the company was looking for new premises. AIT-Budapest — the Aquincum Institute of Technology — was established in 2007 by Hungarian software entrepreneur, Gabor Bojar, founder of Graphisoft , to provide a study abroad experience to North American undergraduates majoring in computer science and engineering.