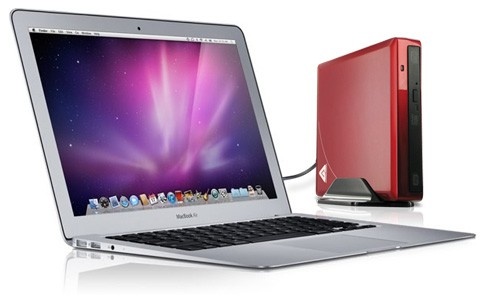 Apricorn (http://www.apricorn.com) has announced the Mac Edition of their Aegis NetDock (US$229 for a1TB model), an ultra-compact 3-in-1 USB Docking Station, combining a 4-port USB Hub, dual layer DVD burner and 1TB hard drive in a footprint smaller than a stapler.

It’s designed especially as an accessory to Apple’s MacBook Air. The Aegis NetDock adds desktop functionality with a single USB connection. It has a candy-red enclosure and space-saving vertical stand.

The Aegis NetDock’s optical drive boasts a Dual Layer recording engine. You can record up to 8.5GB of data per DVD, virtually doubling data storage capacity on a DVD recordable disc from the single layer recording capacity of 4.7 GBs.

Fully compatible with Time Machine, the Aegis NetDock’s built-in hard drive comes in a 500GB or 1TB version. The Aegis NetDock is also available without a hard drive. The open enclosure enables you to add or change out the hard drive and fits any 2.5-inch, 9.5mm SATA hard drive.

In addition, the Aegis NetDock’s energy efficient design incorporates an auto “On” and “Off” feature. It automatically turning on when connected to your MacBook, and powering the Aegis NetDock down when not in use.