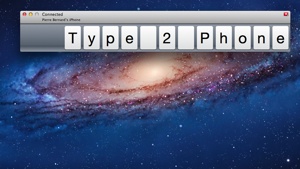 Houdah Software has announced Type2Phone for Mac OS X (10.6 or higher), an app that turns your Mac into a Bluetooth keyboard for your iPhone, iPod touch or iPad. It costs US$4.99 and is available exclusively from the Mac App Store.