Jurassic Park to be unleashed on the Mac Nov. 15 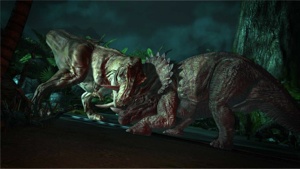 Telltale Games has announced a Nov. 15 release date for Jurassic Park: The Game for the Mac. Based on the book and movie series, the five part episodic adventure title will drop players into the dangerous environs of Isla Nublar, where they will struggle to survive confrontations with dinosaurs as they seek a way to escape, notes “Inside Mac Games” (http://www.insidemacgames.com).

Here’s how Jurassic Park is described: “Jurassic Park: The Game begins where the Barbasol can left off: The dinosaur embryos that Dennis Nedry attempted to smuggle from the park in the faux Barbasol can remain missing. A mysterious rival corporation brings in Nima, a professional smuggler with intimate knowledge of the park’s island setting, to retrieve the embryos.

“When InGen learns of staff stranded on the island after the park’s collapse, they hire a group of mercenaries to launch a rescue operation. The team arrives amidst the chaos of dinosaurs running rampant, and begins to round up survivors committed to protecting the dinosaurs they created. As this group grows, it soon becomes clear that individuals have competing agendas – and the conflict between the humans becomes as dangerous as the rampant dinosaur threats on the island.

“The group must ultimately survive confrontations with T-Rex, Velociraptors and other dinosaurs in spectacular showdowns as they look for a way out. Along the way, a new mysterious nocturnal dinosaur threat emerges, stalking the group as they work their way across the island in hopes of escape.”

The Register: ‘Whatever happened to… the Apple Mac?’