Nielsen: Apple iOS has 28% of US smartphone market 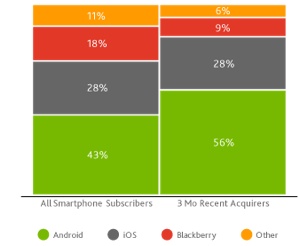 According to an August survey by the Nielsen research group (http://www.nielsen.com), 43% of all smartphone owners have an Android device and 28% have an Apple iOS device.

However, if you ask only those who got a new smartphone in the past three months what kind of phone they chose, more than half (56%) will tell you they picked an Android device, according to Nielsen.. The preferences of these so-called “recent acquirers” are important as they are often a leading indicator of where the market is going, says the research group.

Apple iOS remains popular in second place with 28 percent of all smartphone users, and the same percentage among those who recently got a new device. But those figures could change quickly in the months to come, says Nielsen. Every time Apple launches a new iPhone or makes it available on a new wireless carrier, there is an increase in their sales.

Changes in share aside, the smartphone pie is getting bigger. While 43% of all mobile subscribers in the US had a smartphone as of August, 58% of those who got a new device in the last three months chose a smartphone over a feature phone.

The holiday season and the launch of new devices like the next iPhone could further accelerate smartphone adoption, though this is always tempered by the fact that many consumers are unwilling or unable to break their service contracts before they expire, notes Nielsen. In any event, the growing popularity of app-and-media friendly smartphones spells tremendous opportunity for those advertisers, publishers and developers eager to leverage mobile media. 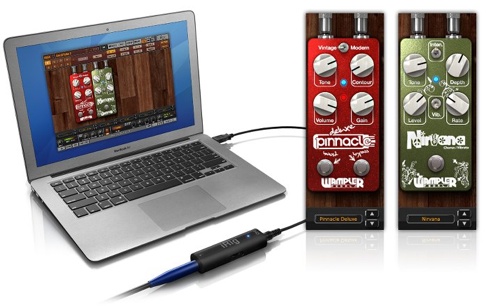 Jobs among ‘People who mattered’ in 2004