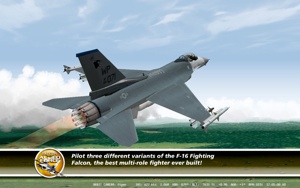 Here’s how the game is described: “Based on the best multi-role fighter ever built, the U.S. Air Force’s F-16 Falcon, Falcon 4.0: Allied Force offers new features and upgrades that enable players to simulate an entire war via the most advanced and truly dynamic campaign engine ever made for personal computers.

FileMaker Pro 7 ‘most awarded database in 2004’