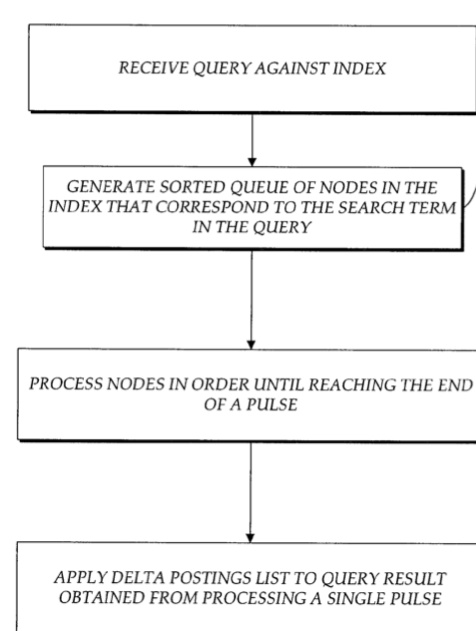 An Apple patent (number 8024351) for a query result iteration has appeared at the US Patent & Trademark Office. Systems and methods for processing an index are described.

Per the patent, a pulse in an inverted index refers to a group of items that do not occur in any other pulse in the index. When processing a query against an inverted index in which pulses are present, the query is processed against a single pulse. The end of the pulse is determined based on the characteristics of the pulse and the linked list nodes that comprise the postings lists from which the index was generated. In some embodiments, index updates are applied to the query result obtained from a single pulse to provide an efficient and up to date query result. The inventors are John Martin Hornkvist.

“Both the Finder program and the Windows Explorer program include a find command which allows a user to search for files by various criteria including a file name or a date of creation or a date of modification or the type of file. This search capability searches through information which is the same for each file, regardless of the type of file. Thus, for example, the searchable data for a Microsoft Word file is the same as the searchable data for an Adobe PhotoShop file, and this data typically includes the file name, the type of file, the date of creation, the date of last modification, the size of the file and certain other parameters which may be maintained for the file by the file management system.

“According to one aspect of the invention, a method for querying an index is described in which the query is run against one pulse in the index in the absence of any marking to indicate where the pulse begins and ends. A pulse is formed when a postings list comprising a series of linked lists is flushed to disk. The method includes determining when the end of pulse has been reached based on certain characteristics of the linked list nodes and the pulses in which they are contained.”