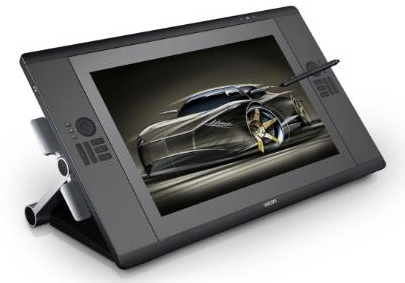 Wacom has released the Cintiq 24HD interactive pen display, which is designed especially for designers, illustrators, animators, video editors and other creative pros.

The ergonomically designed counter-weighted stand allows users to adjust the incline and height of the Cintiq for multiple working postures, even allowing the What’s more, the frame around the screen is designed to be a resting place for the hands and arms, providing access to the Touch Ring and shortcut and modifier Express Keys located on both sides of the Cintiq.  The Cintiq 24HD incorporates Wacom’s most realistic pen experience, featuring 2048 levels of pressure sensitivity and 40 degrees of tilt control, says Don Varga, Director of Professional Products for Wacom Technology Services Corp.

The Cintiq 24HD pen features Wacom’s proprietary Tip Sensor technology, offering users near-zero (one gram) starting pressure and virtually the same natural feel and feedback one would experience when working with traditional brushes or pens, he adds. The pen’s 2048 levels of pressure enable pressure-sensitive effects, such as controlling line weights or opacity.

When combined with pressure-sensitive software applications from such developers as such as Adobe, Autodesk, Corel or Pixologic, the Cintiq is capable of producing life-like artistic results, according to Varga. The pen also features a pressure-sensitive eraser and two side switches that can be customized for common commands such as double-click and right-click.

Wacom’s family of accessories provide additional input options to the Cintiq 24HD. The Art Pen supports the pen rotation feature within Adobe Photoshop and Illustrator, as well as Corel Painter 12, delivering natural brush effects, such as those that a calligraphy pen would produce. Cintiq 24HD accessories are available for purchase at Wacom’s online store.

The Cintiq 24HD (US$2,499) is due to begin shipping in North America in September.  It will be available from a select group of authorized resellers nationwide as well as at Wacom’s online store (http://www.wacom.com/Products/Cintiq/Cintiq24HD).