DocsFlow for InDesign revved to version 7.0 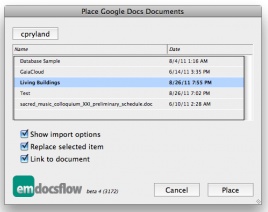 Em Software has announced DocsFlow 7.0 for Mac OS and Windows, an upgrade of their plug-in for Adobe InDesign that dynamically links online Google Docs with InDesign layouts.

Integrating the free Google Docs web application – a text editor that allows multiple users to simultaneously edit online — enables an ideal editorial workflow, according to the folks at Em. DocsFlow lets writers, editors, and designers work together in concert because there’s an active link between the text, in all its drafts, and the story placed in InDesign.

DocsFlow is compatible with Adobe InDesign CS5/5.5 on Mac OS X and Windows. On the Mac it requires Mac OS X 10.6 or higher.

Call of Duty: Back Ops coming to the Mac