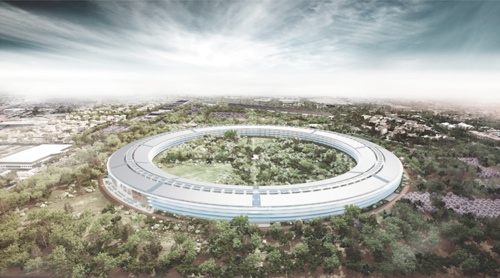 The City of Cupertino, California, has revealed more details and renderings regarding Apple’s plans to build a 2.8 million square-foot spaceship-like circular office building in the city, repots “AppleInsider” (http://www.appleinsider.com).

The city is currently reviewing Apple’s plans. The first step of the review involves an environmental impact assessment that will evaluate traffic, noise, air quality and will provide the public with an opportunity for comment, says “AppleInsider.” Apple’s proposal would then undergo a development review and public hearings at the Planning Commission and the City Council.

According to the company’s plans, the four-story structure, dubbed “Apple Campus 2,” would comprise approximately 2.8 million square feet. A Corporate Auditorium on the campus would seat 1,000 people, while new Research Facilities would take up 300,000 square feet. Other previously released details (from Apple CEO Steve Jobs to the Cupertino City Council) on the headquarters include:

° The plan is to build a four-story high building and four-story parking structure.
° The campus will include an energy center, and natural gas will be the primary source of power, using the grid as backup.

° Apple currently has 20 buses running on bio-diesel fuel for its employees and Jobs thinks that system will work well with the new campus
.
° The plan for the new design will submitted asap, and Jobs hopes to break ground next year and move in 2015.

Hot laptops could cause infertility