Battlestations: Midway available at the Macgamestore 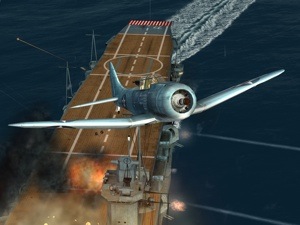 Feral Interactive’s Battlestations: Midway is now available as a digital download title from the Macgamestore (http://www.macgamestore.com). It costs US$29.95 and requires Mac OS X 10.6.4 or later.

Here’s how the game is described: “Take command of the greatest battles of the War in the Pacific.Experience every aspect of combat in this superb blend of action and strategy as you lead a host of US and Allied air, sea and underwater units through intense, action-packed missions in hotspots from Pearl Harbor to Midway.

Battlestations Midway is not just another WWII game; you command the fleet, but you can also assume direct control of any unit. It features fast-paced battles where tactics and ability are tested equally. It is about acts of individual daring as well as the skilled use of combined arms.

At your disposal are over 60 legendary war-machines, including huge aircraft carriers, battleships, destroyers, cruisers, fighter aircraft, bombers and even submarines. It’s up to you to lead by example and defeat the Japanese fleet.”