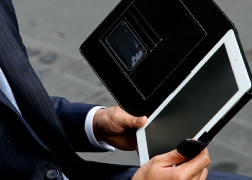 Arnold Aranez (http://www.aranez.com/) has launched the first of a series of tablet and smartphone cases made from genuine kangaroo leather. The initial offering is an US$199.95 case for the iPad 2.

The Aranez iPad 2 Notebook Kangaroo Leather Case has a professional slim notebook design that affords easy access to charging ports, buttons, and camera, says Aranez. It includes a business card holder and a foldout lap-stand, and comes with Aranez Leather Conditioner and a micro-fiber cleaning kit.

Designed to hold the iPad 2 securely, the case is made of genuine Australian kangaroo leather, accented by synthetic silver stitching. For those concerned about the welfare of the ‘roos, Aranez explains that the kangaroos aren’t killed for the leather.

The K-Leather used in the Aranez cases is a byproduct of strategic harvesting instituted by the Australian government to help control the kangaroo population in Australia, particularly in the states of Queensland, New South Wales, Western Australia and South Australia, he adds. The eradication of the kangaroo’s natural predators, combined with the hardy marsupial’s prodigious reproductive abilities, have resulted in a chronic overpopulation problem that, according to the Aussie government, threatens numerous other species as well as the ecosystem.

The management programs control the populations while ensuring the sustainability of the common kangaroo species as a renewable resource. “The skins are a byproduct in the same sense that cowhide leather is a byproduct of the meat industry,” says Ararnez.