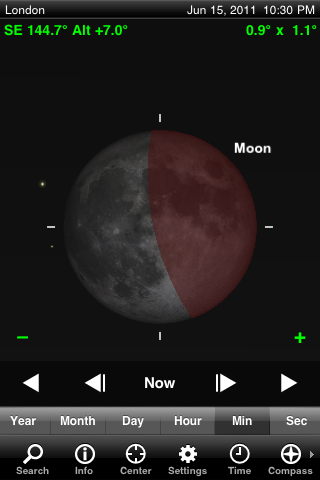 Southern Stars has announced a promotion of its new SkySafari 3 iOS astronomy app, timed to coincide with tonight’s total lunar eclipse. Although not visible from North America, the June 15/16th lunar eclipse will be seen almost everywhere else – over Europe, South America, Africa, Asia, and Australia. It is the longest total lunar eclipse since 2000. To celebrate the eclipse and SkySafari’s second birthday, the basic ver­sion of SkySafari 3 will be free until June 18th. The tim­ing couldn’t be better.

In addition to the basic version, SkySafari 3 comes in Plus ($15) and Pro ($60) versions. And until June 21, those ver­sions are half-price as well. SkySafari’s creators designed the application to be accu­rate. According to Southern Stars, it was the only iOS astron­omy app that cor­rectly repro­duced the total lunar eclipse that occurred last December. The Plus and Pro ver­sions add telescope control with SkyWire (http://www.southernstars.com/products/skywire/index.html), an RS-232 cable that con­nects an iDe­vice to a tele­scope. The Pro ver­sion has the largest data­base of any astron­omy app yet. Weighing in at 500 MB, it includes 15 mil­lion stars from the Hubble Guide Star cat­a­log; 740,000 galax­ies to 18th mag­ni­tude; and 550,000 solar sys­tem objects – includ­ing every comet and aster­oid known to science.

Whether or not you can see tomorrow night’s eclipse, the application is available free on the iTunes store until June 18th.

Vudu comes to the iPad