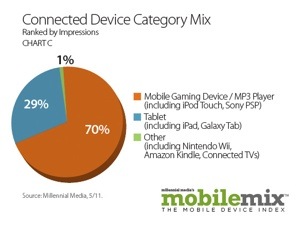 Mobile ad network Millennial Media says its latest figures show that, for May, 70% of impressions came from MP3 players and gaming devices, while 29% came from tablets, and 1% from other devices such as e-readers.

Impressions on the iPad grew 29% month-over-month. In the last year, connected devices as a category are up 190% in impressions.

According to Millennial Media’s latest stats, tablets made up 29% and Windows Phone 7 impressions grew 92% month-over-month. When breaking down all the revenue driven by apps on their network, iOS apps and Android apps were very close, with 45% coming from iOS and 43% from Android, says Millennial Media.

The iPhone maintained its position as the top individual phone on the network for the 20th straight month. Apple was also the leading manufacturer on the Millennial Media network with a 30% share.

Android maintained its position as the leading smartphone OS on the network for the sixth consecutive month with a 53% impression share. Music and entertainment apps grew 14%, to take over the number one spot in mobile app categories (surpassing games). Feature phones experienced a 6% month-over-month increase, and made up 17% of the device OS mix (as opposed to 67% for smartphones and 16% for connected devices) at Millennial Media.