Apple to spend over $5 billion on capital investments this year?

Apple is estimated to be spending up to 5% — or over US$5 billion — of its expected annual revenue this year on capital investments, most notably in a North Carolina data center that will dwarf its current one, reports “Reuters” (http://macte.ch/fewVI).

Andrew Fitzpatrick, director of investment at Hinsdale Associates, told “Reuters” that, as an investor he would be encouraged by Apple moving into the streaming video business. Peter Misek, Jefferies & Co analyst, is expecting a fee-based video service from Apple in about a year.

Apple has only provided content, through its iTunes store, as a support service so far for its core hardware business. But a more aggressive move would help the technology icon capitalize on a lucrative market opportunity, says “Reuters.”

Bernstein Research’s Toni Sacconaghi estimates Apple will spend $2.6 billion in fiscal 2011 on information technology assets. Even if only half of that went to its data center, that would mark an aggressive push, he says.

Consumer spending on cable and satellite TV in the western world last year was $149.5 billion, according to IHS Screen Digest. U.S. cable networks alone generated $45.7 billion in revenue in 2010.

“Reuters” says it “would be just like Apple to enter and dominate an established market with new technology.” Its iPod, launched in 2001, quickly dominated a market of MP3 players; the iPhone was hardly the first smartphone; and the iPad came after Microsoft Corp had tried — and failed — more than once to sell tablets, the article adds. Apple TV hasn’t been a hit on the magnitude of those products, but “Reuters” says experts believe that it was a first step for a more ambitious plan.

Channing Smith, co-manager of Capital Advisors Growth Fund, sees Apple’s move to the cloud as a defensive play. “What Apple should realize is that if they don’t keep up with the technology that is changing, they can become less relevant going forward. This has happened to Microsoft in the past,” he told “Reuters.” 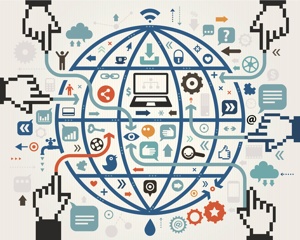 ‘Internet Slowdown’ launches across the web