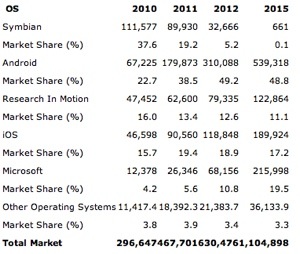 Worldwide smartphone sales will reach 468 million units in 2011, a 57.7% increase from 2010, according to Gartner. By the end of 2011, Android will move to become the most popular operating system (OS) worldwide and will build on its strength to account for 49% of the smartphone market by 2012, according to the research group.

Sales of open OS devices will account for 26% of all mobile handset device sales in 2011, and are expected to surpass the one billion mark by 2015, when they will account for 47% of the total mobile device market.

“By 2015, 67% of all open OS devices will have an average selling price of $300 or below, proving that smartphones have been finally truly democratized,” says Roberta Cozza, principal analyst at Gartner. “As vendors delivering Android-based devices continue to fight for market share, price will decrease to further benefit consumers. Android’s position at the high end of the market will remain strong, but its greatest volume opportunity in the longer term will be in the mid- to low-cost smartphones, above all in emerging markets.”

Gartner predicts that Apple’s iOS will remain the second biggest platform worldwide through 2014 despite its share deceasing slightly after 2011. This reflects Gartner’s underlying assumption that Apple will be interested in maintaining margins rather than pursuing market share by changing its pricing strategy.

This will continue to limit adoption in emerging regions. iOS share will peak in 2011, with volume growth well above the market average, says Cozz. This is driven by increased channel reach in key mature markets like the U.S. and Western Europe.

Research In Motion’s share over the forecast period will decline, reflecting the stronger competitive environment in the consumer market, as well as increased competition in the business sector. Gartner has factored in RIM’s migration from BlackBerry OS to QNX which is expected in 2012.

Analysts said this transition makes sense because RIM can create a consistent experience going from smartphones to tablets with a single developer community and — given that QNX as a platform brings more advanced features than the classic BlackBerry OS — it can enable more competitive smartphone products.

Gartner predicts that Nokia will push Windows Phone well into the mid-tier of its portfolio by the end of 2012, driving the platform to be the third largest in the worldwide ranking by 2013. Gartner has revised its forecast of Windows Phone’s market share upward, solely by virtue of Microsoft’s alliance with Nokia.

Although this is an “honorable performance” it is considerably less than what Symbian had achieve in the past underlying the upward battle that Nokia has to face, says the research group. Gartner analysts said new device types will widen ecosystems.

“The growth in sales of media tablets expected in 2011 and future years will widen the ecosystems that open OS communications devices have created. This will, by and large, function more as a driver than an inhibitor for sales of open OS devices,” says Carolina Milanesi, research vice president at Gartner. “Consumers who already own an open OS communications device will be drawn to media tablets and more often than not, to media tablets that share the same OS as their smartphone. This allows consumers to be able to share the same experience across devices as well as apps, settings or game scores. At the same time, tablet users who don’t own a smartphone could be prompted to adopt one to be able to share the experience they have on their tablets.” 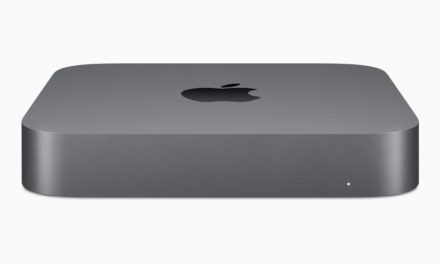