Apple patent is for display that emits circularly-polarized light 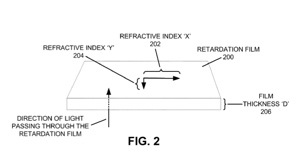 An Apple patent has appeared at the US Patent & Trademark Office for a display that emits circularly-polarized light. The invention generally relates to liquid crystal displays.

Here’s Apple’s background on the invention: “Explosive growth in the popularity of mobile communication and computing devices has created a burgeoning demand for low-power displays. Most portable digital devices include at least one display screen to output information to users. Liquid crystal displays (LCDs), which are based on polarization optics and typically employ linear polarizers on their front surfaces, are frequently used in portable devices. LCDs emit linearly-polarized light, with an electric field that vibrates only in one direction.

“The use of portable computing devices outdoors or in other bright environments can result in users viewing such devices through polarized sunglasses, which typically only allow through light with an electric field that vibrates in the vertical direction. Hence, a user looking at the LCD display of a portable device, such as a global positioning satellite (GPS) receiver, portable music player, or personal digital assistant (PDA), may see a distorted image in the display when viewed through polarized sunglasses, due to the polarized filters in the sunglasses blocking the light when the display is viewed from some angles. Depending on the angle at which the device is held or viewed, the image might be clear, completely dark, or somewhere in-between. An image might be further distorted when a lens cover is placed in front of the display for protection or industrial design, because such lens plastics are typically manufactured without good control of optical birefringence, which can result in non-uniform optical retardation. As a result, when viewed through polarized sunglasses, the image may appear to include numerous color- and gray-shade artifacts.

“Hence, what is needed is an apparatus and a method for alleviating the above-described display issues.”