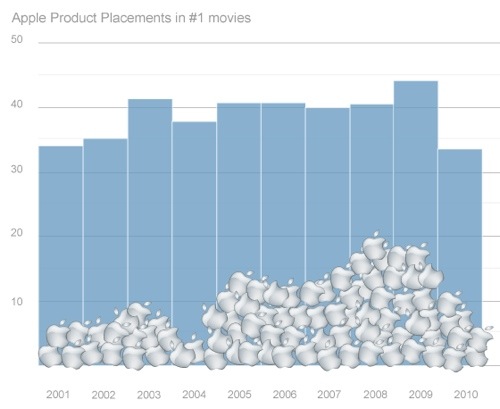 Apple sat atop the product placement charts for 2010 after getting Macs, iPads, iPods and other items featured in 30% of the top movies at the U.S. box office in 2010, reports Brandchannel (http://www.brandchannel.com).

Nike, Chevrolet and Ford tied for second place, each appearing in 24% of the top films. Sony, Dell, Land Rover, and Glock appeared in at least 15% of the #1 films.

In fact, Apple products appeared in more top films in the last decade than McDonald’s and Nike combined (92). Pretty impressive, considering that fewer than 15% of American computer-owning households have an Apple. (That figure, by the way, is up from 9% in 2008 — an indication that Apple product placement may be paying off.)   Those numbers do not even include the preponderance of Apple product placement in films that did not reach #1 at the box office, says Brandchannel.

This award is bittersweet for Apple, however, as it also represents the second straight year of decline of Apple’s product placement dominance in Hollywood, says Brandchannel. The brand is down to appearing in 30% percent of #1 movies last year, vs. 44% of #1 films (19 of 44) in 2009. In turn, 2009 was down from 2008, the brand’s peak, when Apple products showed up in almost 50% (20 of 41) of number one films at the US box office that year. Or to put this visually:

Brandchannel says this slippage in Apple product placement is not due to Apple giving up on the practice — inevitably, other brands are taking a page from its playbook and aping Apple’s product placement strategy. Films that previously would have been dominated by Apples are now filled with HP, Dell and Sony Vaio logos.

Indeed, Sony Pictures has attempted a complete elimination of Apple from its films, replacing them with Vaio-branded notebooks at every opportunity. In the 2003 Sony film Something’s Gotta’ Give, Diane Keaton and Jack Nicholson chatted away on MacBooks; that would never happen today. (That said, Hollywood remains loyal to Apple, even slipping a MacBook and iPhone into Sex and the City 2 despite the film’s deal with HP.)