Color It By Numbers — Animals prowls onto the Mac 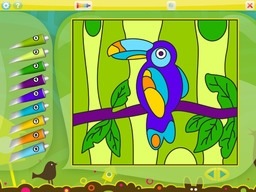 ColorItByNumbers has released Color It By Numbers — Animals (http://macte.ch/QbWpc), the first product in the company´s line of colorful infotainment products for children. This game features three coloring modes and a soundtrack that accompanies children as they paint animal-themed templates in different colors.

This edition of the software is dedicated to animals and features several species, including a dotted Alpine cow, a parrot, an ever-changing chameleon, a funny octopus, a crab, a pelican, a cute puppy, a huge elephant and an African lion. Each animal is represented by a multi-piece coloring template with numbers inscribed into each piece.

Children can pick a brush on the left-hand side and paint regions of the template with corresponding numbers. The other two coloring modes offered by the program include “Color to make it visible” and “Color it in your favorite colors.” In the first case, the user has to color each piece to make it visible on the screen. In the “Color it in your favorite colors” mode, users can unleash their creative potential and paint any element in any color they want.

The coloring templates used in the program are anti-aliased and can be viewed without distortions on monitors with any screen resolutions. Predefined colors can be changed using a color picker at the top of the screen.

Color It By Numbers — Animals is available for US$9.99 for Mac, Windows and Linux systems. Users can also choose between five supported interface languages: English, Spanish, Russian, German and French.

No end in sight to Apple’s retail success