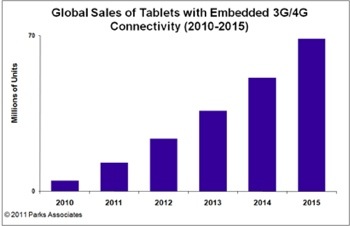 “We are seeing strong consumer engagement in data-intensive services and activities, such as social networking, uploading photos to the Internet, and watching online video, on mobile phones,” says Jennifer Kent, a Parks Associates’ mobile research analyst. “By offering the same mobile Internet capabilities as a smartphone, but with better visual and computing experiences, tablets will also benefit from these consumer behaviors.”

Consumer demand for mobile data will increase further as carriers continue to deploy 3G and 4G networks around the world, enabling better user experiences and opening new markets to reliable mobile Internet access. According to the Parks Associates report, 3G subscribers will double over the next five years to account for 47% of total mobile subscribers in 2015, with an additional 5% of mobile subscribers receiving 4G service. The ability to turn this growing data usage into revenue will be the key challenge for carriers going forward.