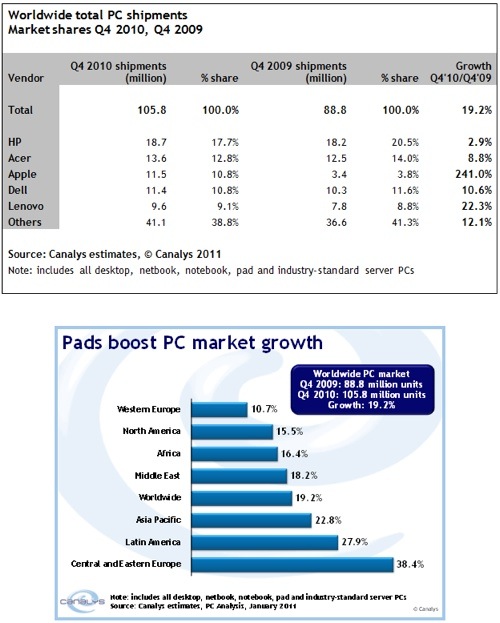 The Canalys research group (http://www.canalys.com) has announced strong computer industry growth of 19% in the fourth quarter of 2010, with Apple climbing to third place in the market, thanks to iPad and Mac sales, as well as fast growth in Asia Pacific.

The analyst company attributes the majority of Q4 market growth to the rising demand for pads, a new product category. Some research groups don’t count tablets among personal computer sales, but I’ve long argued they should be included. Canalys thinks like I do.

“Pads gave consumers increased product choice over the holiday season,” says Canalys Analyst Tim Coulling. “While they do not appeal to first-time buyers or low-income households, they are proving extremely popular as additional computing devices.”

Canalys urges vendors to accept new market realities, by recognizing pads as an integral new component of the overall PC landscape. Unlike other analyst companies, Canalys incorporates pad shipments, such as the Samsung Galaxy Tab and Apple’s iPad, in its total computer market report.

“Pads gave the market momentum in 2010, just as netbooks did the year before. ‘We are encouraging vendors to plan for the future and not to remain stuck in the past,” says Canalys Senior Analyst Daryl Chiam. “Any argument that a pad is not a PC is simply out of sync. With screen sizes of seven inches or above, ample processing power, and a growing number of applications, pads offer a computing experience comparable to netbooks. They compete for the same customers and will happily coexist. As with smart phones, some users will require a physical keyboard, while others will do without. Each new product category typically causes a significant shift in market shares. Apple is benefiting from pads, just as Acer, Samsung and Asus previously did with netbooks. The PC industry has always evolved this way, starting when Toshiba and Compaq rode high on the original notebook wave.”