Yojimbo: an info manager that takes advantage of the Macs’ capabilities 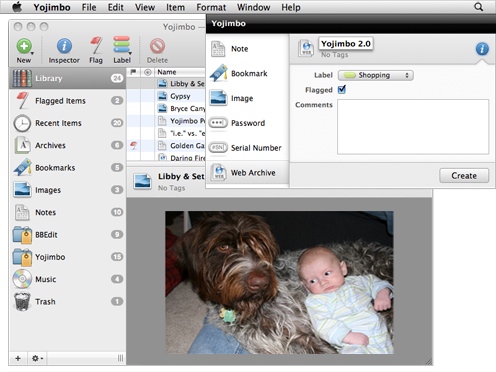 Yojimbo, according to my Japanese friends often translates to “bodyguard” and that’s a good name for a program that keeps and protects the little bits of information that come across our virtual desks on a daily basis. It’s no wonder Bare Bones (http://www.barebones.com) made it a featured app in the new Mac App Store.

Yojimbo is a database of any information you can throw at it and is most often compared to programs like Evernote or MacJournal. Yojimbo 3.0 costs US$38.99, requires Mac OS X 10.5.7 or higher, and will run on both Intel and PowerPC systems.

Of all the information-gathering apps, Yojimbo is the clear leader in Mac integration and featuring a Mac interface. BareBones, the developer of Yojimbo, has a long and rich history on the Mac platform and their expertise shines in this app.

While information can be added via the standard typing or drag and drop method, Yojimbo also
provides hot keys for entries as well as adds itself to the service menu. I was able to keep track of various bookmarks and URLs, right from the menu bar by right clicking. What’s the Japanese word for “sweet?”

For me, tracking bookmarks was the killer feature that brought me back to using Yojimbo.  I was a previous Yojimbo user, but started using other programs which offered synchronization via the web. With the uncertainty of cloud-based bookmark services, I realized the importance of keeping key information directly on my computer.

Synchronization is nice and I’ll continue to use it, but I want to keep a local copy of my data under my exclusive control. I’m concerned not only about free services going away, but I also grow increasingly concerned about keeping confidential data on the web. Yojimbo supports syncing between computers via Apple’s MobileMe service, but the data is not accessible directly via the me.com web site.

Similar to other information managers, Yojimbo uses the collection, label and tag model to allow quick finding and classification of information within its database. An individual piece of information can be listed in multiple folders and be tagged and labelled in multiple ways. Yojimbo handles most data formats such as text, images, PDFs, sounds, and bookmarks.

Alternatively, instead of storing a bookmark, Yojimbo can actually make a web archive of the file, which is great for offline viewing on an airplane. Two data formats unique to the Yojimbo are serial numbers and passwords. These are securely stored in the program. I’ll continue to use my Mac’s keychain for my most secure passwords, but I did like storing serial numbers in this
program within Yojimbo’s structure for quick search and retrieval.

Additionally, Yojimbo effectively uses the Mac’s function keys to bring up the Quick Input menu or to activate Yojimbo’s dock interface for dragging or direct searching.  Other programs have this, they just don’t do it as well. New in version 3.0 is the ability to scan directly into the program, making it great for keeping recipes and hard copies of receipts and serial numbers.

I was disappointed with the iPad version of Yojimbo (sold separately via the iTunes App Store).  The synchronization is only from the Mac to the iPad and must be manually initiated over a local Wi-Fi connection. Information cannot be added or modified on the iPad, only viewed. Given the separate pricing, I’d suggest avoiding the iPad app until two-way synchronization is added.

Another disappointment was the lack of a built-in backup function. Even the help menu doesn’t explain how to back up Yojimbo. To find that out, you have to search Bare Bones’ FAQs. Considering the importance of information stored inside the program, failure to include an easy
backup option is a glaring error.

For version 2.0 users, the only new features is the ability to scan directly into Yojimbo as well as support for the iPad app (again sold separately). Fortunately if you are a 2.0 user, BareBones will give you 3.0 for free! That’s a welcome change from most other companies’policies.

For those users needing an information manager that takes full advantage of their Mac’s unique capabilities, and who don’t need access to that information on devices other than a Mac, Yojimbo is a great and obvious choice. The inability to add information via an iOS device is a severely limiting factor for many users, but I hope Bare Bones will change their approach to ubiquity of information access. Considering the large number of Evernote buyers on the App Store’s
first day, the writing is on the wall.

Pros: Full integration with the Mac’s capabilities and functions, quick and easy data entry anywhere you are on your Mac

Cons: Lack of easy backups, inability to add information via an iOS device.