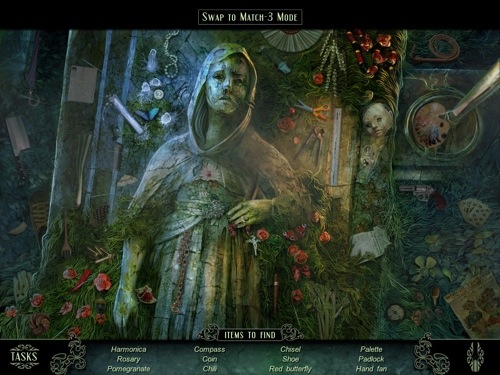 Here’s how the game is described: “Phantasmat marks the evolution of the adventure-horror genre in casual games. Combining compelling plot with hidden-object and match-3 mechanics, this game follows up with beautifully hand drawn art and AAA production values. The player can pick from three vastly different difficulty modes, and is able to switch the gameplay from Hidden Object to Match-3 at any moment.

“The game immerses the player in the dark story of a sunken city and mysterious hotel still inhabited by its former citizens. The suspense is heightened by an impressive soundtrack by Rob Westwood.

“While Phantasmat operates in the realm of modern casual adventure using hidden object and match-3 mechanic, it also features a deep story and setting more akin to the classic adventure games of the past. Each of the complex characters the player meets is professionally voiced, including an appearance by Michael McConnohie of Diablo 2, World of Warcraft and Mass Effect fame.”

The Collector’s Edition features extra game content such as an additional hour of gameplay incorporated into the Epilogue. Players also get access to development materials, like concept art, character profiles and more.

Phantasmat Collector’s Edition is immediately available for purchase at the Codeminion web site store (http://phantasmat.com/) for US$19.99. The game is available in English, German, French and Polish.