IBM recently unveiled the fifth annual “Next Five in Five” — a list of innovations that have the potential to change the way people work, live and play over the next five years. The Next Five in Five is based on market and societal trends expected to transform our lives, as well as — not surprisingly — emerging technologies from IBM’s Labs. Here’s the third part of our look at what IBM predicts — and how this might affect the Apple world.

While you may not be a physicist, you are a walking sensor. In five years, sensors in your phone, your car, your wallet and even your tweets will collect data that will give scientists a real-time picture of your environment, according to IBM. You’ll be able to contribute this data to fight global warming, save endangered species or track invasive plants or animals that threaten ecosystems around the world.

In the next five years, a whole class of “citizen scientists” will emerge, using simple sensors that already exist to create massive data sets for research. Simple observations such as when the first thaw occurs in your town, when the mosquitoes first appear, if there’s no water running where a stream should be — all this is valuable data that scientists don’t have in large sets today. Even your MacBook Pro, MacBook or MacBook Air will be able to be used as a sensor to detect seismic activity.

IBM says that, if properly employed and connected to a network of other computers, your laptop can help map out the aftermath of an earthquake quickly, speeding up the work of emergency responders and potentially saving lives.
IBM is contributing mobile phone “apps” that allow typical citizens to contribute invaluable data to causes, like improving the quality of drinking water or reporting noise pollution. Already, an app called Creek Watch allows citizens to take a snapshot of a creek or stream, answer three simple questions about it and the data is automatically accessible by the local water authority. So your iPhone, iPod touch and iPad can even get into the act of helping save the plant — and saving lives. 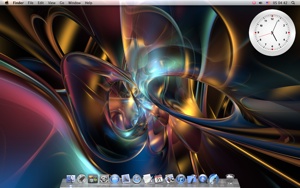 Create, remove disk partitions on the fly with DiskStudio