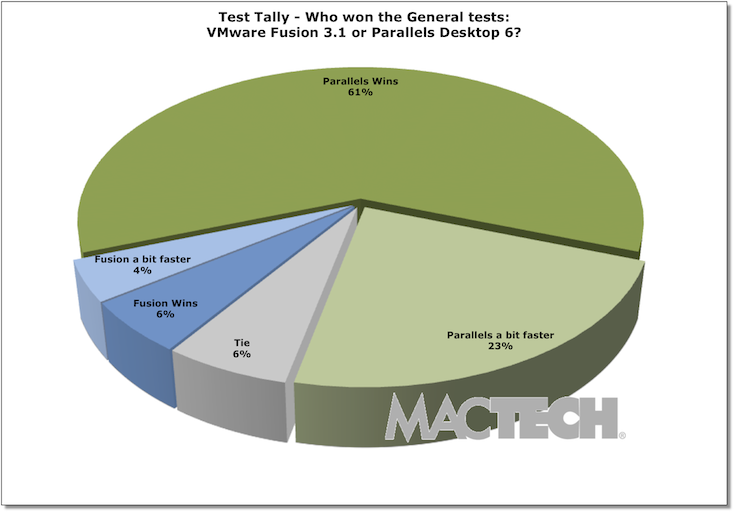 How does VMware Fusion 3.1 and Parallels Desktop 6 for Mac compare?

For the past several weeks, MacTech has been working on its latest benchmarks for virtualization. Rather than look at the ‘version-dot-oh’ release, we typically wait for versions to settle down a bit so that we can give our readers results that are relevant for a longer period.

We’ll shortly be releasing comprehensive results on our tests of VMware Fusion 3.1 vs. Parallels Desktop 6 and our January issue of MacTech Magazine in print will be talking more about virtualization. <blatant marketing>If you want to get that issue delivered to your door, now is the time to subscribe. See http://macte.ch/subscribe now. Virtualization is also one of the key topics at MacTech Boot Camp in San Francisco on January 26th, 2011</blatant marketing>

This benchmark suite, as it has been in the past, is made up of several thousand tests, many of which are done with a stopwatch to give you real world results. It gives you, the reader, an even-handed assessment as to performance for the areas that we cover (virtual machine actions, file I/O, CPU footprint, IE and Microsoft Office, and of course, 3D graphics and games).

To be clear, this article is not a product review; it’s a benchmarking analysis. You should use it as part of your decision combined with other factors such as product features, interface preferences, and support to make your product choice.

We’re double-checking things and putting the final touches on this large scale analysis now. In the mean time, in advance of the holidays, we thought we’d offer you up a preview of how the tests went.

We won’t keep you in suspense. When we look at the “big picture” of all the testing, Parallels is the clear winner. If you count up the general tests (including one 3D graphics score), Parallels won 61% of the tests by 10% or more, and was also a bit faster on an additional 23% more of the tests. In other words, Parallels Desktop 6 beat VMware Fusion 3.1 in 84% of the general tests we ran.

If you focus exclusively on 3D graphics, as measured by 3DMark06 version 1.2, Parallels won by an even larger margin. Specifically, Parallels won 73% of the tests by at least 10%, and was also a bit faster on an additional 19% more of the tests. In other words, Parallels Desktop 6 beat VMware Fusion 3.1 in 92% of the 3D graphics tests we ran.

When VMware Fusion was faster in 3D graphics, it was typically on the HDR/SM3.0 Score and the Batch Size tests (e.g., triangles). But, as you can see from the test tally, Parallels Desktop was overwhelmingly faster in graphics, and in working with real games, it was easy to see confirmation of the 3DMark06 scores. 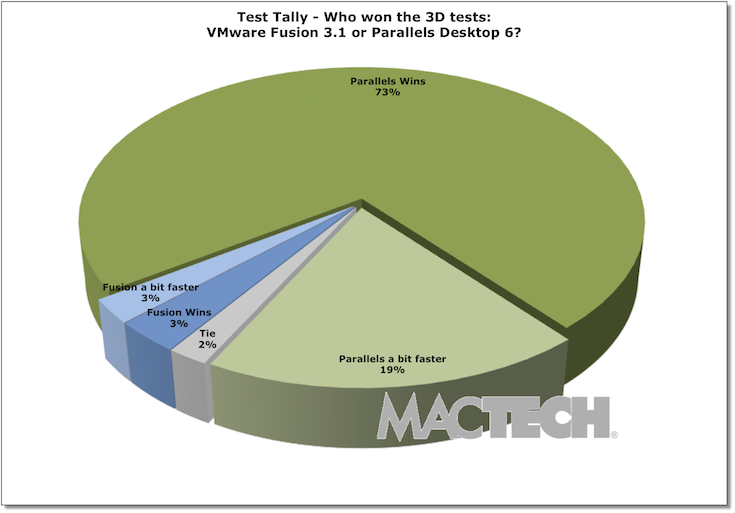 There are a handful of places that VMware Fusion is consistently faster than Parallels Desktop. In Microsoft Word 2010, VMware launched (adam or first launch after boot) faster, and was faster on large, global search and replaces. It was also consistently faster running under Windows 7 doing file compression, and loading SSL pages.

Since the last time we did comprehensive virtualization benchmarks, Parallels had a major upgrade from version 5 to version 6. With a major upgrade, we expected to see some nice benefits. We only tested a few things to get a sense, but we saw:


Since the last comprehensive benchmarks, VMware had a minor bump from 3.0 to 3.1. We were curious how these versions differed on the current hardware and OS for the same types of tests, and saw these benefits:

If you want upgrade or other information, see VMware Fusion 3.1 and Parallels Desktop 6 for details on these products.

To be clear, this article is not a product review; it’s a benchmarking analysis. You should use it as part of your decision combined with other factors such as product features, interface preferences, and support to make your product choice.

The full version of the study will allow you to have better insight into the areas most important to you whether it’s virtual machine operations, file IO, application speed, CPU footprint, specific types graphics performance, and more. This will give you the best performance information for your specific situation — as each user’s needs are different.

Furthermore, the full article will give you insights to Windows 7 vs. XP performance — so you can decide whether to upgrade there as well. (Information on upgrading to Windows 7 is at the Microsoft Store.)

Look for the complete study when it comes available, and virtualization coverage in the January 2011 issue of MacTech Magazine. And, for discussion at MacTech Boot Camp on January 26th, 2011 in San Francisco.

Read the FULL article which details results of more than 4,000 benchmark tests of Parallels Desktop 6 vs. VMware Fusion 3.1 by clicking here. (link) 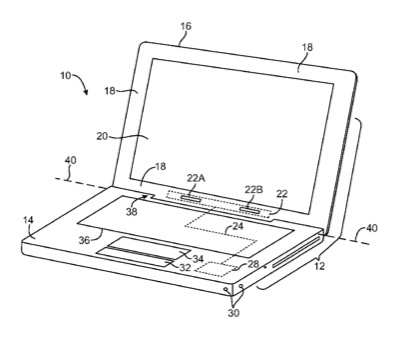