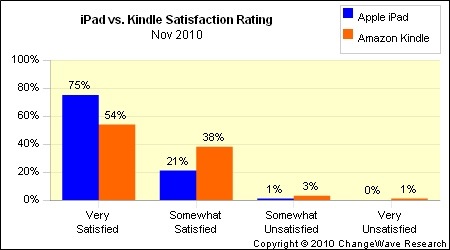 The eReader market has essentially become a two horse race between the Amazon Kindle and the Apple iPad, according to the latest survey of more than 2,800 consumers by the ChangeWave research group (http://www.changewave.com).

The Amazon Kindle (47% of the market and down 15 points) is hanging on to a rapidly diminishing lead over the iPad (32%; up 16 points) among current eReader owners. However, the iPad’s share of the overall market has doubled since the last time ChangeWave surveyed e-Reader owners in August. The rest of the market includes the Sony Reader (5%) and the Barnes and Noble Nook (4%).

In terms of owner satisfaction ratings, ChangeWave’s survey shows that 75% of iPad owners are “very satisfied” with its eReader capabilities compared to 54% for the Kindle. The research group also asked eReader owners about the types of content they’re reading on their devices — and found major differences between iPad and Kindle owners. For example:

° Amazon Kindle owners are more likely to read books on their device (93%) than iPad owners (76%).

“Before the iPad launch, Steve Jobs promised that a major effort would be made to develop alternative types of media on the Apple tablet,” says ChangeWave. “The survey evidence suggests Apple has been highly successful in this regard to date.”