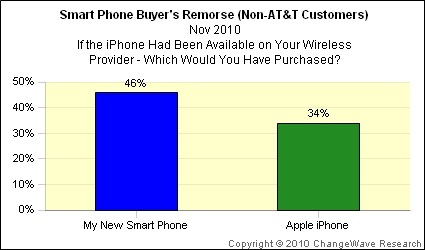 To find out which smartphone manufacturers are currently winning and losing the market share battle, ChangeWave Research (http://www.changewave.com) asked 1,212 consumers who had purchased smart phones within the past six months to rate their new models. Not surprisingly, the iPhone came out on top.

The ChangeWave survey was completed November 2, 2010. First, the research group looked at customer satisfaction with the new smartphones that respondents had purchased during the past six months. Seventy-seven percent of iPhone users were “very satisfied,” compared to 71% of Motorola users, 63% of HTC users, 45% of Samsung users and 44% of RIM users.

Among individual iPhone models, the iPhone 4 received an exceptionally high “very satisfied” rating (84% for 32GB; 78% for 16GB) — confirming ChangeWave’s earlier survey findings that despite the controversy surrounding its initial launch, the iPhone 4 has been extraordinarily well received by its owners. The iPhone 4 scores are even better than the ratings for the earlier generation iPhone 3GS models (81% for 32GB; 77% for 16GB) which were recorded in ChangeWave’s May 2010 new smartphone owners survey.

With the rumors and speculation continuing about the imminent release of a new Verizon iPhone, what impact would such a move have on the smart phone market? ChangeWave asked non-AT&T respondents whether they’d have still purchased their new smartphone if the iPhone had been available at their wireless service provider at the time of purchase. One-in-three non-AT&T smart phone buyers (34%) say they’d have bought the iPhone instead if it had been available at their service provider.