Don’t forget to vote! I voted already to flush the inverted toilet bowl building on Capital Hill and against virtually every local incumbent running in my district in Kansas. Personally, my “change” is run out. I want my congressional delegation to experience the unemployed situation and deep recession, first hand.

The upcoming Mac OS update and the pending iPad 4.2 update, both expected any day now, will continue to enhance interconnections between everything Apple and Wi-Fi related. The iPad, Apple TV and the new MacBook Air all point us towards wireless Internet connection of all Apple computing devices, with less reliance on mechanical hard drives and less local flash memory being required.

The cloud comes rolling in. The new trend in Apple devices to reduce local storage and rely on the cloud for storage of everything streamed to us is happening. Streaming content is just being accessed over the Internet — and downloading is streaming something you store locally.

I speculated a while back that the new server farm in North Carolina would present a Mac software store, music store, app store for iOS devices and streaming for Apple TV and also support electronic publishing such as magazines and newspapers.

An  announcement that Netflix and Apple are somehow combining may also be just around the corner. I am convinced the push for the living room that Apple has been long trying to work out will require being the big guy on the block in streaming video content. I am talking about really  giving the satellite and cable TV companies a run for their money. Apple commonly attacks industries with a poor reputation for customer satisfaction with enough money in it to matter.

Things at Apple may seem to be moving really fast, but it takes time to move the vector of a glacier towards a new basic trend. In the past, the constantly lower price per gig of hard drives, the smaller and smaller footprint and the “go-to” market method for software companies involved shipping disks. The app store is a model for the Mac OS platform as well. As Internet connection speeds have increased, the trend has been to move away from the physical delivery of digital content to downloading and streaming.

Streaming is particularly advantageous for video content as movies, especially HD movies, require a lot of storage. The evolution of the Apple TV demonstrates the change from downloading to streaming.  If you imaging that a lot of folks have a personal bit of storage at the Apple server farm — and with MobileMe or .Mac that is actually the case. Then imagine I pay through my iTunes account to “buy”  a movie so I can see it anytime I want. If I download it and store it on a drive it uses up my storage in large chunks.

If I store the movie in the cloud it could also use up a lot of my limited storage at the server farm. However, if the cloud simply notes that I have the right to stream the movie anytime, there need not be a copy in my file, but only a tiny “access note” that authorizes me to stream the movie again, any time. Thus, theoretically, once every movie is posted on the server farm, only one copy need be available for the thousands who have a right to stream it any time they want to see it.  That is the advantage to both my local storage and the server farm. Access is easier than actual storage of many copies of the same movie.

It will take a selling job to convert the Mac faithful to this approach. Google has led the way with server based software. You have to trust Google to not lose your documents and that access to applications will remain when you have paid for it. I trust Apple much more than I do Google.

As it is now, when I get an email, while at home it sounds like a door bell going off — the iPhone dings,  the Pad chimes and the MacBook Pro dongs to announce a single email.  Then when I check the email on one device the others know it and show the message as read or discarded.  The new OSs coming out soon will further sync all my devices, printers and the Internet.  Apple has been working hard on all this and I expect great things.

How to be a BeerMeister 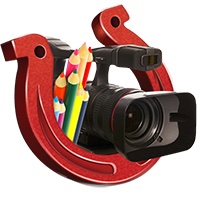