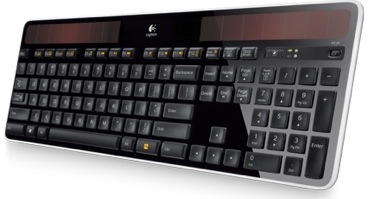 The Logitech Wireless Solar Keyboard powers itself through its integrated solar panel, so no power bricks or charging cables are needed. The included solar power app (available for download beginning Nov. 15) features a lux meter to help you get the necessary light, lets you get at-a-glance information about battery levels, and even alerts you when you need more power.

Logitech’s first solar keyboard can be powered by indoor light and stays charged for at least three months in total darkness, according to Denis Pavillard, vice president of product marketing for Logitech’s keyboards and desktops. It’s 1/3-inch thick and sports rounded edges and a thin profile.

The keyboard features Logitech Incurve keys. Using a concave design, Incurve keys support the shape of your fingertips, while helping guide your fingers to the right keys, says Pavillard. In addition, the soft, rounded edges make it easy for your fingers to glide from key to key, he adds.