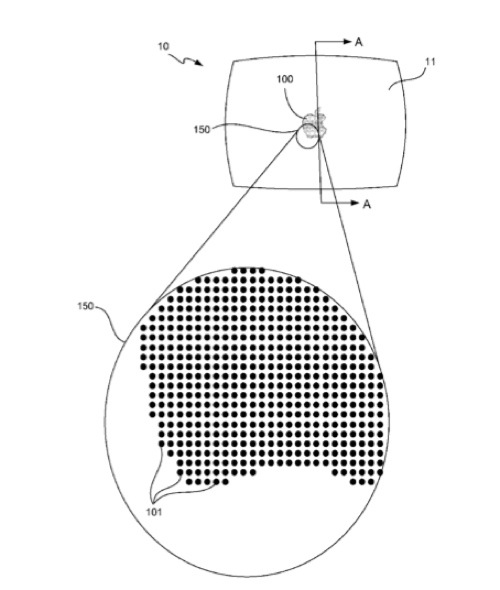 Apple wants to make displays are there simpler in design and even better looking, according to a new patent at the US Patent & Trademark Office. Patent number 20100271767 is for microperforated and backlit displays having alternative display capabilities.

Here’s Apple’s background and summary of the invention: “Sophisticated computers, televisions, appliances and other electronic devices are developing at a rapid rate. There is an ever-present demand for improved appearance, improved functionality, and improved aesthetics in the newest devices. One area that continually receives great attention for improvement in such devices includes user displays, lights and other visual indicators.

“Much of the aesthetic appeal of an electronic device or other consumer product can quickly be compromised if there are too many display elements, lights and indicators, or if too much of the visible display area is occupied by display elements that are not needed or relevant at all times. When not needed, these ‘passive’ or unactivated visual display elements can remain perceptible to the user, even though in the ‘off’ state. This is not only displeasing from an aesthetic standpoint, but it can be an annoying distraction that interferes with the perception and understanding of other visual display elements that are of greater importance or should be observed at a given moment.

“It is an advantage of the present invention to provide an aesthetically pleasing backlit display having alternative display capabilities, particularly for use with an electronic or other personal device. This can be accomplished at least in part through the use of a base object having a matrix or other formation of microperforations formed therein and arranged into an overall visible pattern, such that a light source providing light therethrough can be perceived by a user on the other side. Alternative display capabilities can include the ability of the visible pattern to be readily perceived by the user even when the light source is turned off.

“In various embodiments of the present invention, a visual display can include a base object having front and back surfaces on opposing sides as well as a plurality of microperforations therethrough, a light source, and a contrasting surface finish formed on the front surface. The base object can be an opaque material, such that light shining through the microperforations can be seen by a user on the opposite side of the light source.

“In various detailed embodiments, the overall pattern can comprise a logo, a trademark, text, and/or an advertisement, among various other items. The base object can comprises a metallic object such as an aluminum or stainless steel object. The contrasting surface finish can comprise separate and different anodizations of the front surface, or can comprise separate and different platings of the front surface. Other surface treatments to distinguish the pattern when the light source is turned off are also possible.

“The microperforations can be filled with a clear epoxy material. Also, the light source can be a light emitting diode, a liquid crystal element, and/or an electroluminescent light, among other suitable possibilities. In some embodiments, the light source can be adapted to change colors while light is continuously emitted therefrom, for a more dynamic and aesthetically pleasing visual display.

“The visual display can includes a plurality of microperforations from the front surface through to the back surface of the opaque portion, a light source placed proximate to the back surface, and a contrasting surface finish formed on the front surface. Further details, variations and features can be similar to the various visual display embodiments provided above. The electronic device can be a laptop, personal computer, media player or cell phone.

“In still further embodiments, a method of forming a visual display is provided. Process steps can include selecting a base object composed of an opaque material and having front and back surfaces, forming a plurality of microperforations in the base object in an overall pattern such that light is able to pass therethrough, placing a mask over the front surface to mask front surface area that lies outside the overall pattern, anodizing the portion of the front surface exposed by the mask, removing the mask to reveal a front surface having at least two visibly different surface finishes, and positioning a light source proximate to the back surface. Alternatively, a plating process involving a print resistant ink can be used to form the two visibly different surface finishes on the front surface.

“Other apparatuses, methods, features and advantages of the invention will be or will become apparent to one with skill in the art upon examination of the following figures and detailed description. It is intended that all such additional systems, methods, features and advantages be included within this description, be within the scope of the invention, and be protected by the accompanying claims.”

Deals: Compost 70% off today only

Ihnatko on whether Watson should exist and weblogs