The Apple TV as game console

The new Apple TV has met with a very mixed bag of advance notices (I have one ordered; when it arrives I can give you an in-depth report). However, “VentureBeat” (http://games.venturebeat.com/2010/09/06/how-apple-could-undermine-console-gaming-via-tv-app-games/) thinks the device could compete with game consoles if Apple plays its cards right. They may be onto something.

“VentureBeat” says that all Apple would have to do is launch an Apple TV version of the Apple App Store on Apple TV with downloadable game apps. The article says that Apple might “further disrupt the business by selling its own Apple-branded connected TVs with Apple TV built right in.” Since Apple has cool touchscreen and motion-sensing controls in its iPod Touch, iPad and iPhone devices, it already has lots of game controllers in place that could be used to control games on the TV, adds “VentureBeat.”

The Sellers Research Firm (that’s me) is still dubious we’ll ever see Apple-branded TVs, but is almost certain it’s just a matter of life before there’s an App Store for the Apple TV. I wouldn’t be surprised to see it debut before Christmas. And downloadable games that use iPhones, iPod touches and/or iPads as controls make lots of sense. It would further entrench Apple in the living room — and, let’s face it, even “take three” of the Apple TV barely gets Apple’s food in that door. We also need TV tuner capabilities built-in (a la Elgato products for the Mac) and the ability to add external storage so we can use the device as a DVR. But more on that later. Now we’re talking about the Apple TV as a gaming device.

As “VentureBeat” notes, it would take work to reformat games for the high-definition resolution TVs, but creating apps that run on connected TVs won’t be that difficult, particularly if developers are convinced there’s a market for such apps.

If/when that happens, the Apple TV isn’t going to replace consoles or computers for hard-core gamers. But it could certainly scoop up a large number of casual gamers, put even more money in Apple’s coffers and polish the image of the Apple TV a bit more.

Then there’s the proposal I’ve made before, based on the GameDock concept introduced by “Mac|Life” (go to http://www.maclife.com/article/feature/future_apple_design?page=0%2C2 for the mock-up).

Here’s what the minds at “Mac|Life” came up with, based on the success of the iPhone/iPod touch as a gaming platform: “Take this nifty little gaming platform and assign it double duty as both a handheld and a console system. The GameDock accommodates the iPhone and iPod touch and hooks directly to your TV and the Internet. Whether you download a game wirelessly via the handheld or wiredly via the GameDock, you pay just once for two versions of the same title.

I still like that idea. In face, what if Apple used the GameDock as a way to sell more Macs by offering Mac-only gaming options that tie in with the iPhone and iPod touch? In my scenario, the GameDock would connect to a Mac (and perhaps be built into high-end iMacs), allowing Apple computers to run the “bigger” versions of the “mini” games on the iPhone and iPod touch that “Mac|Life” suggested. The GameDock would also allow multi-touch, accelerometer-equipped game controls (made by Apple, natch) to be used with the Mac games.

Barring that (and I don’t think it’s going to happen), offering higher-res versions of iPhone/iPod touch/iPad games on the Apple TV (with, perhaps a special discount for upgrade pricing) — as well as games specifically designed for big screen TVs — would be a boon for developers, casual gamers and the Apple TV. 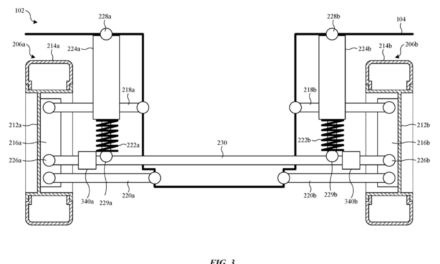