Samsung Mobile has announced the results of a new online survey that showed working Americans who own smart phones are breaking old boundaries on when and where it’s appropriate to make and take business calls. And some folks are a bit too enamored of the phones.

According to the results, these professionals conduct their business far, far away from the office setting including while on vacation, the bathroom, during a date, at church or even during — now, c’mon, folks, get a life — sex. Respondents admit the need to stay connected and productive with their jobs led them to take their business calls into more private settings than ever before, such as a trip to the bathroom or during an intimate moment with their significant other.

Close to three quarters (72%) were comfortable taking calls on the commode, while at least one out of every 10 people came clean about doing business over the phone at a funeral (16%) or in the throes of passion (10%). Other taboo business calls have taken place in the middle of the night (59%), during a date (38%) and at church (32%).

Another interesting tidbit about the study: according to survey findings, nearly three-quarters (72%) of respondents say that their dependency on their smart phone has reduced the frequency they use an office computer or laptop. Four in 10 (40%) also claim they feel most productive working from a smart phone outside the office, rather than at a desk on their computer. Consequently, nearly a third (32%) see their smart phone as more important than their desktop or laptop computer. In fact, 51% turn to their smart phone to work on projects instead of their computer, even if their monitor is within reach.

As the smart phone continues to increase in prominence in today’s mobile world, 29 percent of survey respondents say they can envision the day that office computers become obsolete, with smart phones taking their place. (Sorry, ain’t gonna happen, IMHO). More than seven in ten (71%) office workers with smart phones think companies should automatically supply the phones, rather than laptops, to all employees free of charge. 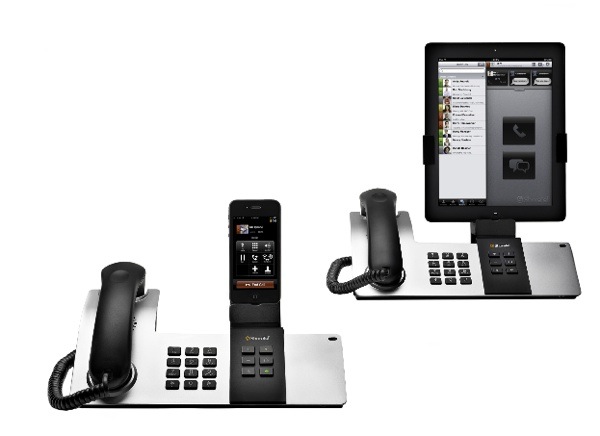 ShoreTel Dock transforms an iPad and iPhone into a desk phone