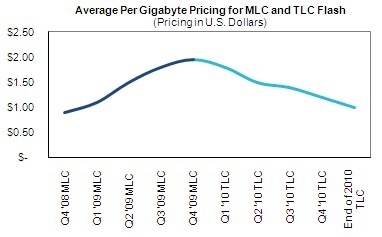 After two years of inflated prices, NAND flash memory at the end of 2010 is set to return to the key US$1 per gigabyte level considered a key threshold to drive adoption of Solid State Drives (SSD), but the cost reduction may come too late to help the struggling SSD market, according to the market research firm iSuppli Corp. (http://www.isuppli.com).

Pricing for 1GB of 3-bit per cell (TLC) NAND flash memory will average $1.20 for the entire fourth quarter and then decline to $1.00 at the end of the year. This represents a precipitous drop from the first quarter of 2010, when pricing for TLC averaged $1.80 per gigabyte and 2-bit per cell (MLC) flash was at $2.05, iSuppli memory pricing and forecasts indicate. It also marks the first time NAND flash pricing fell below the $1 threshold since the fourth quarter of 2008, when MLC pricing averaged 90 cents per gigabyte.

“When NAND pricing first fell below the $1 level at the end of 2008, many observers opined that its would sound the starting gun for solid state storage, allowing the technology to be cost competitive with Hard Disk Drives (HDDs) in PCs for the first time,” says Michael Yang, senior analyst for memory and storage at iSuppli. “However, during the following quarters, pricing rose because of strong demand and constrained production capacity, limiting the appeal of SSDs to low-volume servers in data centers and preventing widespread adoption in high-volume business and consumer computers.”

Now with pricing back to the $1 level, the SSD market is ready to get back on track — or is it?

“With NAND pricing having returned to per-gigabyte pricing levels not seen in two years, there’s likely to be a lot of new buzz created for the solid state storage market at the end of 2010,” Yang says. “However, traditional HDDs gained a lot of additional ground during the past few years in terms of rising capacity and falling prices. In fact, HDDs have gained so much ground that SSDs now are in danger of never regaining their competitive footing.”

To compete successfully with HDDs, per-gigabyte pricing for NAND flash memory will have to decline to 40 cents by 2012, Yang opines. At such pricing, a 100Gbyte SSD could cost $50, when supporting electronics are added in. This would make solid state storage more appealing in consumer and corporate computers.