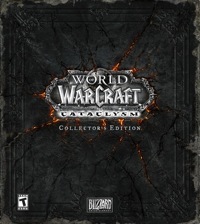 Blizzard Entertainment has announced plans for a limited-release Collector’s Edition of World of Warcraft: Cataclysm (http://www.worldofwarcraft.com/cataclysm), the third expansion for the subscription-based massively multiplayer online role-playing game, World of Warcraft.

The special Collector’s Edition package, which will only be available at retail stores, will include the following exclusive bonus items in addition to the game disc:

° Art of the Cataclysm art book, featuring 176 pages of never-before-seen images from the archives of the Blizzard Entertainment cinematics department and the World of Warcraft development team, as well as progressive visuals from multiple stages of development.

° Exclusive in-game pet: he may not be a breaker of worlds just yet, but Lil’ Deathwing will still accompany heroes on their struggle to save Azeroth from his much, much larger counterpart.

° Behind-the-scenes DVD with over an hour of developer interviews and commentaries, as well as a special Warcraft retrospective examining the rich gaming history of the Warcraft universe.

° The first two World of Warcraft expansions, The Burning Crusade and Wrath of the Lich King.

As for the game itself, here’s how Word of Warcraft: Cataclsym is described: “In Cataclysm, the face of Azeroth will be forever altered by the return of the corrupted Dragon Aspect Deathwing. Players will explore once-familiar areas of the world that have now been reshaped by the devastation and filled with new adventures. In an effort to survive the planet-shattering cataclysm, two new playable races — worgen and goblins — will join the struggle between the Alliance and the Horde. As players journey to the new level cap of 85, they’ll discover newly revealed locations, acquire new levels of power, and come face to face with Deathwing in a battle to determine the fate of the world.”

The beta test for World of Warcraft: Cataclysm is currently underway. To set up a Battle.net account and sign up for a chance to participate, visit the official Battle.net website at http://www.battle.net .

The World of Warcraft: Cataclysm Collector’s Edition will be available on DVD-ROM for Mac OS X and Windows at a suggested retail price of $79.99. The release date and other details for the game will be announced in the months ahead.