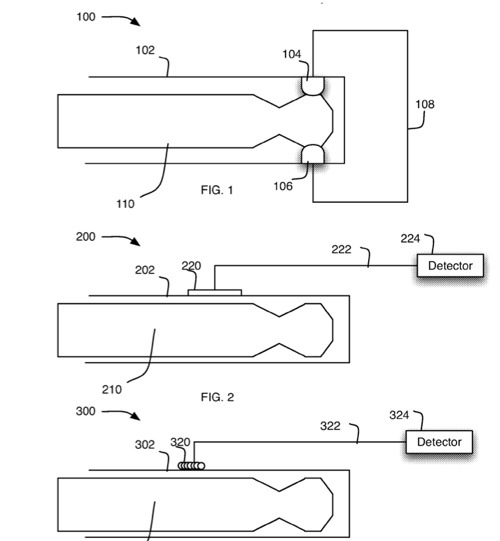 An Apple patent (number 20100182159) for a contactless plug detect mechanism has appeared at the US Patent & Trademark Office. This is directed to systems and methods for detecting the insertion of a plug in a device port without physically contacting the plug.

For example, systems and methods are provided for detecting the insertion of an audio plug into an audio jack without using physical contacts placed in the periphery of the audio jack. In some embodiments, an electrically conductive element (e.g., a circuit board trace) can be provided on a surface of the port or within the port wall. When a metallic or conductive plug is inserted into the port, the plug can interact with the conductive element and cause a change in capacitance or induction detected by appropriate circuitry coupled to the conductive element.

In some embodiments, an optical sensor can be used to detect a plug placed in a port. In some embodiments, the electronic device can detect distinguishable attributes associated with the contact between the electrical contact of plug and port contacts using an appropriate sensor (e.g., a microphone or an accelerometer). The inventors are Stephen Brian Lynch, Fletcher Rothkopf and Gordon Cameron.

Here’s Apple’s background and summary of the invention: “Many electronic devices provide functionality via accessories coupled to the electronic devices using a plug. For example, media players can include a jack into which an audio plug can be inserted to provide audio from the device to a speaker or headphone connected to the jack. As another example, laptop and desktop computers can include USB ports for receiving USB accessories such as input mechanisms (e.g., a keyboard and mouse), peripheral devices (e.g., a printer), storage media (e.g., external hard or solid state drives), or any other suitable accessory providing additional functionality to the device.

“To provide the additional functionality, an electronic device may first detect the accessory device plug inserted into an appropriate aperture of the device and enable a state associated with the detected accessory device. One typical manner to detect a plug is to provide spring arms or other components in the device aperture that are placed in physical contact with the plug upon insertion of the plug. For example, an audio jack can include two or more conductive spring arms operative to create an electrically conductive connection with an inserted plug. A circuit can then detect that the two or more conductive spring arms have been shorted to determine that a plug was inserted in the device.

“A plug can be inserted in a jack or other port to provide enhanced functionality to the electronic device. As the device manages its operations and resources, it may selectively enable particular functions associated with different ports based on the type or number of connected peripheral devices. For example, a media playback device can be in a first state in which media playback is enabled when an audio plug is detected in a jack, and in a second state in which media playback is prevented when no audio plug is detected in the jack. This may require the electronic device to first determine when a plug is inserted in a device port.

“In some embodiments, the electronic device can instead or in addition use an optical sensing mechanism to detect the presence of a plug in a port. For example, the port wall can include one or more apertures through which an emitter can emit radiation that reflects off of the plug and back to a detector, which detects the reflected radiation. In some cases, the detector can be operative to identify particular radiation reflected from the plug. For example, the detector can be operative to identify a particular wavelength radiation (e.g., light waves reflected in particular manner off a polished plug (e.g., an audio plug).”

Will the iPad go mass market?