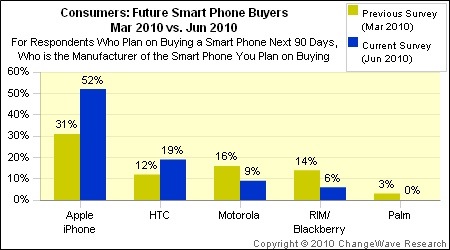 ChangeWave’s latest smart phone survey of 4,028 consumers shows an explosive transformation occurring in consumer demand — resulting in some major new winners and losers for second half 2010. At the individual manufacturers’ level, going forward the survey findings show a major leap for Apple and HTC at the expense of RIM and Motorola.

The survey — completed June 24 — took a close-up look at consumer demand for the new Apple iPhone 4 and the HTC Droid Incredible, along with the impact these and other offerings are having on the rest of the smart phone industry. Consumer smart phone planned buying going forward is at an all-time high for a ChangeWave survey – with 16.4% of respondents in our latest survey saying they plan on buying a smart phone in the next 90 days.

The iPhone 4 is driving much of the industry’s growth, with more than one-in-two (52%) respondents who plan to buy a smart phone in the next 90 days saying they’ll get an Apple iPhone. That’s an explosive 21-point leap over ChangeWave’s previous survey.

HTC (19%) also shows a huge improvement going forward — registering a 7-point jump in terms of future buying plans. On the other hand, Motorola (9%) has declined 7 points since the previous ChangeWave survey. The biggest loser in the current survey is RIM (6%), which has registered an 8-point drop to its lowest level ever in a ChangeWave survey.

Satisfaction among existing customers helps explain much of the momentum shift in the smart phone market. The Apple iPhone continues to lead all other cell phone manufacturers, with 73% of owners reporting they are “Very Satisfied” with their iPhone.

The ChangeWave Network (http://www.changewave.com) is a group of 25,000 business, technology and medical professionals. ChangeWave surveys its members weekly on a range of business and consumer topics.

Kaspersky Labs: Apple wants our help on OS X security — or not (updated)