What’s in store for the Mac? A dockable computer

Although Apple’s Big Love right now is being bestowed on the iPhone and iPod, I think we’ll see some truly innovative Macs in the next 2-3 years. I certainly expect some to offer built-in micro-projects, as I’ve mentioned. I also expect to see a laptop and combination dock/display.

Of course, you can buy docks for current laptops. But Apple has at least considered making a portable device that inserts into a special display. A patent (number 20080278899) appeared in 2008 for methods and apparatuses for docking a portable electronic device that has a planar-like configuration and that operates in multiple orientations.

The invention relates to improved techniques for transferring data and/or power between portable electronic devices and the docking stations. The docking system also includes a docking station configured to mechanically accept and operatively interface with the portable electronic device in any of its multiple orientations including vertical and horizontal.

It includes a portable electronic device having a front side and substantially planar back side opposite the front side — and including a full screen display at the front side and a power transfer mechanism at the substantially planar back side. The full screen display is configured to display content in an upright manner whether the portable electronic device is used horizontally or vertically.

This sounds like a futuristic laptop set-up to me. Of course, it could also be plans for a souped-up iPad — one powerful enough to make a larger display mode feasible. (An iPad Pro, perhaps?) And, of course, Apple files patents and develops prototypes for devices that never see the light of day. 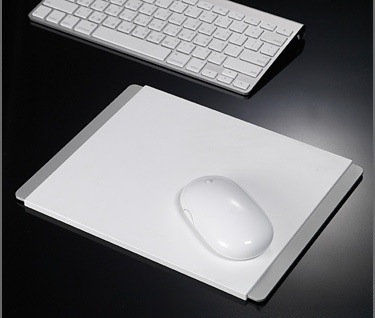