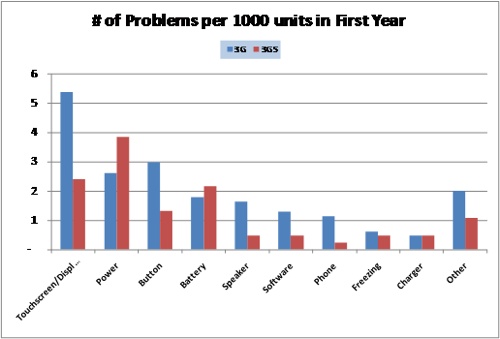 SquareTrade, an independent warranty provider, has completed their second annual study on failure rates for Apple iPhones. Based on data compiled from over 25,000 3G and 3GS iPhones covered by SquareTrade since 2008, the study found that 25.6% of the devices experienced a failure in the first two years, compared to 33% in 2009.

The improvement in iPhone reliability was driven largely by the 3GS model’s substantially fewer touchscreen failures than the 3G. Of the total failures, 18% encountered damage due to accidents and another 7.5% were hardware malfunctions. When the data is projected out three years, up to 40 percent of 3GS iPhones are expected to experience some type of failure.

Other findings from the iPhone study:

° More than two-thirds of accidental damage was due to dropping the device, most resulting in cracked screens (Note: with the iPhone 4 having a glass backside, failures due to drops will be an area to closely monitor).

° With the exception of power and battery issues, the 3GS had fewer failures across all problem types compared to the 3G. A breakdown of types of failure is shown in the graphic. The full study is available at
http://www.squaretrade.com/pages/squaretrade-iphone-reliability-06-2010 .