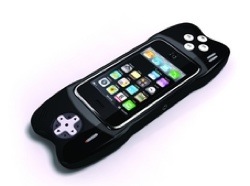 22Moo (http://www.22moo.com.au) has added support for the iPad and iPhone 4 to their redesigned iPod touch and iPhone compatible gamepad: the GameBone. A shipping date and pricing haven’t been announced.

The GameBone’s availability is currently targeted for end of the fourth quarter of 2010. It will purportedly be placed into over 5,000 stores worldwide by more than eight international distributors.