AT&T is pulling in the reins on data usage by its customers with smart phones and iPads as next week’s Apple Worldwide Development Conference looms, where new iPhones are expected to be announced, reports the “Associated Press” (http://finance.yahoo.com/news/ATampT-caps-phone-data-usage-apf-499602515.html?x=0&.v=6).

The U.S. carrier of the iPhone is introducing two new data plans, starting June 7, with limits on data consumption. They’ll replace the US$30 monthly plan with unlimited usage that it has required for all smart phones, including the iPhone.

The AP says that, with the change, AT&T is adopting a “carrot-and-stick approach to assuage the data congestion on its network.” Subscribers who use little data or learn to limit their consumption will pay slightly less every month than they do now, while heavy users will be dinged with extra consumption fees.

With that plan and voice service, a smart phone could cost as little as $55 per month before taxes and add-on fees, down from $70 per month. Ralph de la Vega, the head of AT&T’s consumer business, said that means smart phones can become accessible to more people. “Customers are getting a good deal, and if they can understand their usage, they can save some money,” he told the AP. Current AT&T subscribers will be allowed to keep the unlimited plan, even if they renew their contracts. But all new subscribers will have to choose one of the two new plans. 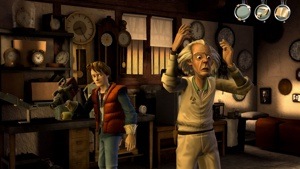 Back to the Future: The Game comes to the Mac