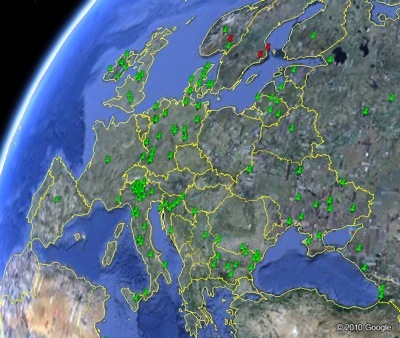 ABI Research (http://www.abiresearch.com) has been tracking cities and population coverage for 4G for the past year. At the end of 2009 there were more than 170 802.16e carriers across 65 countries, covering 480 million people. That number is projected to cross the one billion mark by the fourth quarter of 2012 (4Q 2012).

USB dongles have been an excellent vehicle to prime the market along with CPE and laptops, says the research group, but mobile handsets will be essential to the success of WiMAX. Yota, Sprint, and Clearwire have already started beefing up their lineups with models from HTC and Samsung.

Meanwhile, mobile operators are seeking out LTE licenses. Twenty carriers will launch by 4Q 2010. Population coverage lags WiMAX but will catch up, reaching 600 million people by 4Q 2012. LTE coverage will start in urban hotspots but carriers indicate they will push coverage rapidly in order to handle the increasing mobile data wave.

The 4G market could well have 150 million subscriptions by 4Q-2014, according to ABI Research. The split between WiMAX and LTE will depend on WiMAX carrier commitments to upgrade to 802.16m. WiMAX vendors such as Motorola and Huawei are gearing up to offer “802.16e+” which will bring features of 802.16m to the current market. Many companies in the ecosystem are already working on interoperability testing for 802.16m.

“TD-LTE is the wildcard,” says ABI Research Vice President for Forecasting Jake Saunders. “It was originally primed as an evolutionary technology for TD-SCDMA carrier China Mobile, but has been gaining interest from some WiMAX carriers. Both camps will be frantically trying to ramp up IC wafer manufacturing, product portfolios and population coverage. There will be considerable scrutiny over the next few years.”

Practice director Philip Solis adds, “Some WiMAX service providers may switch from WiMAX to TD-LTE, but others are doing this partly as insurance and partly to assure investors of an alternate path so they may go forward with WiMAX. This is something for smaller greenfield service providers to consider. Large mobile operators will move forward with LTE whether it be on FDD or TDD spectrum. Clearwire can do both WiMAX and LTE if it wants to since it has the spectrum to do so.”