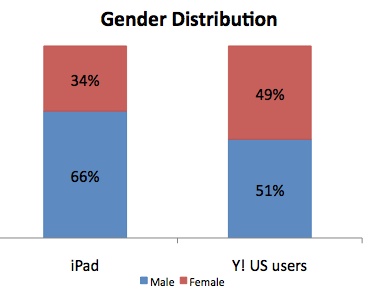 Inside Yahoo! (http://ymobileblog.com/blog/2010/05/06/apple-ipad-user-analysis/) has compiled some stats on iPad users and have found, not surprisingly, a male skew in the 35-44 age group among these early users.  In fact, among all users, men outnumber women 2:1.

Given the economy, people with higher earning power were probably the first to buy the iPad. The first Yahoo! iPad users were 94% more likely to be affluent consumers with solid wealth and strong incomes than typical U.S. Yahoo! users.

The sweet spot for the Yahoo! iPad user is within the 35-44 age category, where the population composition is 36% higher than the typical Yahoo! user. Additionally, iPad users over-indexed within the age ranges 30-54 compared to the average U.S. Yahoo! user.

During the measurement period, the iPad has only been available for purchase in the U.S. market; however, Inside Yahoo! observed approximately 10% of IP traffic coming from Europe and Asia Pacific. Specifically, the U.K., France, and Germany are the top countries in Europe, and Taiwan and Hong Kong make up the most traffic in Asia Pacific.