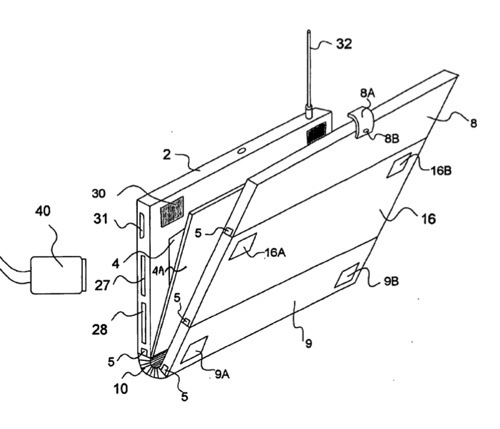 Another day, another lawsuit. NetAirus Technologies LLC has sued Apple over a patent related to wireless handset communications, claiming the defendant’s iPhones infringe the technology.

El Segundo, Calif.-based NetAirus lodged its complaint Friday in the U.S. District Court for the Central District of California. contending that Apple’s iPhone, iPhone 3G and iPhone 3GS products infringe on its patent. The patent in question was granted to NetAirus on September 5, 2006 and seems to cover the broad concept of a “Wireless Handset Communication System.”

However, looking at the patent (number ) it seems it’s more for a netbook device than a portable phone. Here’s the summary: “A small light weight modular microcomputer based computer and communications systems, designed for both portability and desktop uses. The systems make use of a relative large flat panel display device assembly (2), an expandable hinge device (10), battery power source (9), keyboard assembly (16), and wireless communications devices (32, 51). The systems are capable of bi-directional realtime communications of voice, audio, text, graphics and video data. Both wire-based or wireless communications methods and devices are implemented. Wireless communications devices may include one or more telephone-like handsets (14) and/or earset (34). The wireless communication devices may include one or more antennae (32). Systems can be configured in a portable arrangement similar to conventional notebook computers, but can be quickly and easily disassembled and re-assembled for office desktop uses. Systems may consist of a base computer unit (100) comprising wireless communication devices may act as a relay station relaying voice and other data between the handset or earset and external wide area communications networks. The system may be capable of performing, personal digital assistant (PDA), cellular telephone, conventional notebook computer, desktop computer functions.”